Shout out to my homegirl Steph at I Train therefore I eat for a “One lovely blog award”! 🙂

And to acknowledge her nomination, here are the rules:

1. Link back to the blogger who nominated you
2. Paste the award image anywhere on your blog
3. Share seven facts about yourself
4. Nominate other blogs you enjoy for this award
5. Post a comment on your nominees’ blogs to let them know of their nomination

So here we go!
1. Well, first and foremost, everyone knows this about me but, considering the AMAZING VICTORY LAST NIGHT, it needs to be repeated: I am, and always have been, the biggest LeBron James fan on planet Earth. I don’t care what anyone says about him because watching him play basketball makes me so happy. He is the ultimate athlete. I might have cried when he announced he was coming to Miami, and I may or may not have cried last night when they won.

2. I was born in Jensen Beach, FL – so I am a true Floridian! We moved up North when I was 5, but I visited family down here a lot and somehow wound up back in Florida for college. I want to stay for as long as possible because sunshine, beaches and palm trees are my jam.

3. I  am awkwardly ambidextrous. I write with my right hand, but throw & do pretty much everything else with my left. My strong hand in lacrosse is my left, and I was a very left footed soccer player.

4. I will always believe that the 1999 women’s world cup team – Mia hamm, kristine lilly, julie, brandi, michelle…did something that will never, ever be duplicated. They were my heroes as a kid and gave me the confidence and mindset to pursue athletics, coaching and sports performance.

The greatest team ever

5. I tore my ACL – not once, but twice, in college – and even though it was one of the hardest things ever, I am glad I went through it. The mental toughness and the determination to rehab and come back stronger taught me a lot of things about myself. It is also proof that if you work hard enough, you can achieve whatever you want, no matter what anyone says. People are always shocked to find out how much I can lift and sprint despite the surgeries and bad ass scars.

6. I won two goldfish at a fair in 4th grade [Lucy and Ethel] & they lived to be 13 years old. I think that is some kind of unofficial record. It was a lowkey tragedy when they died.

7. One day, I will be going to the Olympics affiliated with SOME team – so look for me. 😉

Once upon a time, at the beginning of this year to be exact, I set out to accomplish the awesome task of completing 10 unassisted [neutral grip] chin ups.  Why?  Several reasons: including (but not limited to):

B) They help in more ways than I can count [grip strength, core activation, lats/biceps/forearms/etc., energy transfer…..]

Now, even though I dominated my first real unassisted chin up a few years ago, I had finally reached a point where I wasn’t improving. I could manage 4-5 with various weights attached to me, I could do assisted and eccentric til the cows came home (which, they never did, so I just kept going) and I could do way too many sets of 5-6 reps with ~1-2 minutes of rest in between, but never more than 7 at a time. Hmmm.

Then it dawned on me. If I wanted to get better at pull ups, I should probably do more pull ups.

I realized that even though chin ups were my goal, I was treating them as an accessory movement and programming them into my workouts 1-2 times per week, [3x if I was really pushing it]. I also took note of the total reps being completed each session and saw that they were all in the ~25-30 rep range. So by the end of each week, I was totaling MAYBE 75 pull ups a week if I was lucky. Granted, I was using different methods (weighted, eccentric, assisted, different rest intervals) but not in the same week. I would go all assisted one week (different reps/sets/rest intervals) then go to weighted, then to bodyweight, and then back to assisted.  Each variation still felt challenging and I would make little advances, so I was convinced it was working, but then I would go to test my regular chin ups and be stuck in the same spot. I realized that despite my variations in intensity, I was completing the same number of reps per week and therefore not overloading the movement anymore. SO my evil genius mind got to working…

Practice makes perfect, so if you want to get better at something, practice THAT thing. I changed my programming to focus exclusively on this goal. I was tentative before to overdo it on chin ups because I didn’t want to have angry elbows, tight lats, and/or overtrain my back. But, by varying the intensity, I realized I could cram lots of pull ups/chin ups into one week of training with very little consequence. I also made sure to program some overhead/QL stretches for the tight lats, and included asymmetrical work to keep my upper body balanced.

Each week looked something like this [I am only including the chin ups and not all the other stuff]:

Day 4: Bodyweight pull ups again (usually if I did sets of 5 on day 1, I would shoot for sets of 6. Sometimes I had it, sometimes I didn’t. This was a chaos day – I would mix the sets to try to achieve 50 any way I could. It was a great challenge)

Each week I would have a total number of reps completed, and for 3 weeks I kept that number increasing, and then by week 4 I would do a mini-deload and go back to week 1 numbers.

Then one magic day, I walked into the gym, walked up to the bar, cranked out 10 in a row, did a little dance (in my head) and that was that.

And that is how my dream came true and I conquered the neutral grip chin up.

week 2 of the summer fitness challenge!

… And we’re back for week 2! (If you missed it, last Monday I introduced a 12 week fitness challenge program for the summer). It’s ok if you just want to jump in with week #2, or you could always just jump in head first and do both challenges this week 🙂

First off, how many of you actually took the stairs the entire week? Did anyone count how many stairs they took? As I said last Wednesday, after I wrote that post for you guys, I found out that my “extra points” challenge for my work program was to climb 1000 stairs during the week. Being someone that doesn’t have a crap ton of stairs in my daily life, I immediately started calculating how many stairs I’d have to take per day… and got a little nervous. But then I started counting, took a few extra trips between my…

Even though she’s a celtics fan, this is a great idea 😉

I’m going to be re-blogging these mini fitness challenges for anyone that wants to take part in them. Lets go!

I mentioned last week that I was thinking about giving you all some fitness challenges to go along with the team program that I’m doing at work. I still haven’t quite decided how I’m going to do this, particularly how I’m going to post the results; if there will be a prize at the end, etc.

So you want a prize? I don’t think you can beat this.

But that all doesn’t really matter for now, so let’s get started!

I have decided on a few things to get us moving here, however:

Earlier this week I finally jumped on the Fitocracy app bandwagon – and I’m happy about it. For those of you that aren’t familiar, Fitocracy is a website/app that helps you track your workouts while simultaneously earning points for your activity. It is also a social media site similar to facebook that concentrates solely on fitness and connecting with like-minded individuals. It also has some fun “quests” to complete if you’re running low on workout motivation or just need a change of pace. I’m really liking it just for something different. I know I’m a little late to the party but if you guys haven’t checked it out, go here 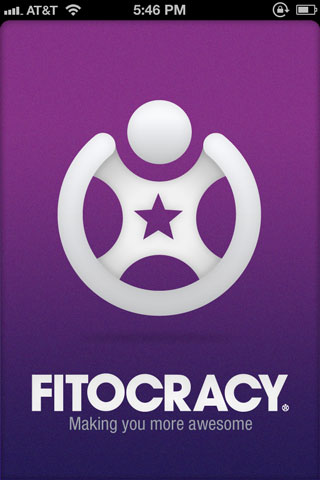 I decided to attempt the intermediate widowmaker the other day, just for fun (backsquat with 80% of your bodyweight on the bar for 20 reps). Haven’t been squatting consistently lately but still managed to complete 2 sets of it. I probably won’t ever walk again, but that’s fine.

What I really like about the whole thing is the idea of getting points for activity & achieving new levels – like a game – vs tracking workouts & obsessing over calories. I’m also really impressed with the exercise selection – I didn’t think I’d be able to find any of my weird exercises on there, but I was pleasantly surprised. They even had some of my dynamic reach movements which I’ve never seen on any other website.

Anyone that trains clients might want to recommend this to them to keep them motivated. I’m also happy to have a reason to log my workouts again. I’ve been getting a bit lazy when it comes to keeping track lately, and my notepad on my iphone is a sad little excuse for programming. This amps things up a little.

Another fun thing I thought I’d share is a version of the GHR (Glute ham raise) that can be done in any gym with a lat pulldown machine. The GHR is one of the best exercises out there for the posterior chain – but very few commercial gyms have a specific machine for it. It can easily be duplicated using this method – I do it all the time and have great results with it. Be prepared, though. People will think you’re nuts. The other day a lady came up to me after I finished my workout and told me it was the “coolest, scariest & craziest thing” she had ever seen. I love it.

*Credit to Ellisonfitness for this video

He uses a BOSU ball to push off of – I use a low plyo box. If you have access to an adjustable step, a bench, a plyo box, or a BOSU ball, use any of those. Start with something higher and gradually progress down. These are BRUTAL – and a lot of people can’t get them right away – but they’re worth working toward. The GHR is ideal for the hamstrings because it is more true to running form (hip extended/knees flexed vs hip flexed/knee flexed that you see during a seated hamstring curl). If you can’t get 1, put a resistance band around the lat pulldown machine and around your chest and it will assist with the concentric portion of the movement. Enjoy!