For the first few years of my college career, I was overwhelmed with scientific information related to exercise science, kinesiology, and anatomy.  Research papers from all these notable scientists, physiology terms that made me nervous, and concepts that seemed way beyond the scope of my intelligence.  While I can obviously look back now and understand it a lot better, one of the most frustrating things in this field is the disparity between research studies & actual results. 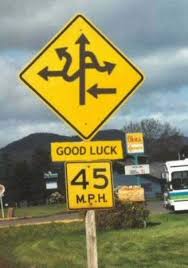 Now this isn’t a rant against science (not completely anyway 😉 but it is a comment on how terms like “CLINICALLY PROVEN” and “SCIENTIFIC METHODOLOGY” need to be taken with a grain of salt.  I’m not even talking about the usual suspects (Hydroxycut, dexitrim, anything with a before & after picture, etc..those aren’t even worth my time…) but I’m talking about real, legitimate research.  Most of these studies, especially ones in notable publications like the American (or European) Journal of Physiology provide great insight into physiological mechanisms, but the results have a tendency to get grossly generalized.  You’ll see a lot of people out there writing articles and using research to back it up – which is great, because it seems to “legitimize” their theories – but how do you know what’s bogus and what’s for real without pulling your hair out over little details?

This is one of my favorite examples that a professor of mine uses every year when introducing research papers for discussion- and I’m sure a few of you have heard it too.  In the attempt to avoid correlation, he shows us a graph like this:

hide ya kids, hide ya wife

Clearly, based on the research, we see a rise in murder rates that seem to correspond with the sale of ice cream.  From this, it seems reasonable to conclude that ice cream causes murder…or at least contributes to it, right?  (Another case against sugar haha).  However – what are other factors here?  Ice cream sales tend to go up in the summer.  Know what else goes up in the summer?  Temperature.  Murder rates tend to rise when people are hot and bothered (and not in the good way).  See the variability?  It seems like a preschool example, but SO MANY TIMES I see people jump to the same absurd conclusions.

“These people showed insane increases in strength using the leg press.  EVERYONE MUST LEG PRESS!”

“LEG PRESS ONLY IT SAYS IT IN THE RESEARCH”

That’s a bit of an exaggeration, but you get my point.  For a more appropriate example, let’s take something we discussed in a class of mine earlier this week.  It is commonly accepted in the research that interval training > long slow distance training, particularly when looking at improvements in VO2max.  But, is it REALLY fair to compare these modalities?  In a word, no.  The way we quantify training load (intensity x duration x frequency) is skewed with these two types of training.  You might run the same number of miles, but the duration and intensity are completely different.  So, when it comes to training load, it is almost like comparing apples to oranges.

Now, I know about energy system manipulation and I’m a huge fan of interval training, particularly for sports performance, but I’m not arguing which is right or wrong.  I’m just pointing out that there is a lot of variability here for us to jump to conclusions.  From an anecdotal perspective (which shouldn’t be discounted, because if it works, you should do it): a lot of endurance runners seem to feel that LSD training takes longer to achieve improvement, but these improvements seem to remain longer vs interval training which develops faster, but gets lost faster.  This isn’t confirmed by research, but is an interesting point.  Why else would runners that use primarily LSD training (i.e. Kenyans) be so successful? Just a thought.

It wasn’t until my senior year of college where I actually started interning with teams, coaching my own teams & training clients other than myself that I started to REALLY notice the gap between what the textbooks say and what individual results dictated.  There were times when scheduled de-load weeks were premature for some clients and too late for others.  There were times when clients who had very few issues during assessments couldn’t do simple exercises.  There were times when equipment issues caused me to change my programming, and I ended up with even better results than I had planned for.  Some clients could be pushed into the ground, and others I could barely train without some sort of issue.  It would frustrate me because a lot of people around me would be freaking out about “doing it by the book” and that simply wasn’t possible for me every single time.  While I think a lot of textbooks, articles and research papers lay the blueprint for success – and you should adhere to them as much as possible as a beginner – you can’t just be a drone.  You have to be aware of your surroundings, your capabilities, and your teams/clients individuality.

In the end, I’m a huge advocate of staying up to date on current trends and appropriate research, but the most beneficial pieces of advice I’ve received have been from people with true “under the bar” experience.  You can’t argue with concrete evidence (i.e. actual experiences), so don’t freak out the next time something doesn’t work exactly according to “plan”.  The human body is more complex than a lab rat- and FYI: lab rats can’t squat.